On 5 February 1964 the military junta that ruled Ecuador gave a grant of more than 1,400,000 hectares to the Texaco-Gulf consortium to explore and extract oil from the Ecuadorian Amazon. Although the concession area was reduced as successive contracts were signed, the area operated by Texaco covered over 400 hectares (Grant 1973) within the provinces of Sucumbios and Orellana.

The Chevron-Texaco trial for environmental damage proved (in final judgment) that within these limits Texaco drilled more than 350 wells and dug around 1,000 pits or “pools” for depositing toxic sludge and drilling materials, formation water, and other debris from the operations.

At that time the area was inhabited by the Secoya, Siona, Huaorani, Shuar, Kichwa, Cofan and Tetete nationalities. The Cofan people was reduced from 5,000 to less than 800 inhabitants who were displaced from their land. The Tetete people were exterminated completely. These original inhabitants of the Ecuadorian Amazon are characterized by a harmonious relationship with their environment. They meet their needs by maintaining a natural balance through a permanent dialogue with nature.

The area where Texaco operated was characterized by high biodiversity and abundant resources for Amazonian people. Thanks to their harmonious relationship with the environment, the inhabitants knew no poverty because they had everything they needed: the jungle provided food, drink, shelter, and served as a school, church, library and pharmacy. They didnot know of diseases such as cancer. To demonstrate this particular richness we can also rely on the testimony of those who lived through this change.

On November 3, 1993 almost 30,000 Ecuadorians, including Indigenous peoples and settlers affected by the contamination left by Texaco, filed a legal claim in New York. On August 16, 2002, the Tribunal of Appeals in the Southern District of New York ordered that the case be transferred to Ecuadorian jurisdiction, which Chevron agreed to submit. On May 7, 2003, those affected by Texaco’s operations initiated legal action against the oil company in the Superior Tribunal of Justice of Sucumbios. After 10 years of litigation before the Ecuadorian Tribunals, Chevron Texaco was sentenced to repair and compensate for damage. Today Chevron refuses to recognize the judgment against them, and instead has decided to use its resources to pursue their victims.

Specifically talking about the rights of Nature, we can say that the right to exist (and therefore restoration) and to maintain the integral cycles of nature have been violated by the presence of environmental damages that have not been repaired due to the refusal of Chevron to serve its sentence.

After analyzing the evidence presented the Tribunal 1) condemns Texaco (now Chevron) for using technology known as inadequate, causing irreversible damage to the Amazon rainforest and violating of the rights of Nature and 2) orders the company to comply with the provisions of the Ecuadorian Tribunals and proceed to full compensation of the subject sites.

The Tribunal considers the Ecuadorian State responsible for having allowed the oil industry to act negligently and to not appropriately control oil activities.

Similarly, the plaintifs consider Mr. John S Watson, Chairman and CEO of Chevron, responsible for violation of the rights of Nature for his role in preventing the execution of the judgment of the Ecuadorian Tribunals.

The Tribunal agrees to submit the record of this case to the UN to develop a statement to prevent impunity of transnational corporations and requesting the UN to include a statement recognizing Nature as a subject of rights. The Tribunal further agrees to submit the record to the Permanent Court of Arbitration at the Hague where it is currently being presented by the affected operations suing Chevron Texaco to incorporate a reflection on the ecocide.

Pablo Fajardo (lawyer, UDAPT) gave evidence of how the actions of Texaco/Chevron had led to the spilling of millions of gallons crude oil and the dumping of billions of gallons of toxic wastewater and hazardous waste, which had left devastating effects on Mother Earth and indigenous communities. Whilst Texaco/Chevron had left the area, the toxic substances remain in the cycles of Mother Earth. Mr Fajardo argued that the acts of Texaco/Chevron were an Ecocide as rivers do not recognise human borders and thus significant and durable damage had been done on a part of the Global Commons as defined under Article 6 of the Ecocide Amendments. In addition Humberto Piaguaje (of the Secoya people) explained how the pollution of the waters was a killing of the spirit of the river that was part of his peoples’ cosmovision, such cosmovision arguably being part of the Global Commons through being a cultural service of spiritual enrichment under Article 7 of the Ecocide Amendments.

He has held important positions of representation of the Secoya nationality and, since March 2012, he is the Executive Coordinator of the Union of People Affected by Texaco’s Oil Operations (Udapt), 1 he was so designated by those affected by the company, as Piaguaje has accompanied the struggle since its inception, that is, since 1993.

The Udatp is the organization that represents more than 30 indigenous people and settlers from the provinces of Orellana and Sucumbíos, who were affected by the contamination left by the Texaco oil company, today Chevron.

By delegation of the OISE, he is the official spokesperson for the Secoya nationality in the lawsuit against the oil company Texaco, for the social and environmental disaster caused in the Ecuadorian Amazon. He has made several trips to the United States to serve as a witness and plaintiff in the United States Courts, in addition, he has been in several countries in Latin America and Europe to spread the word about the fight that Udatp is leading.

He lives in Lago Agrio, with his wife and five children. 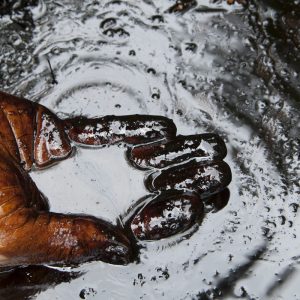 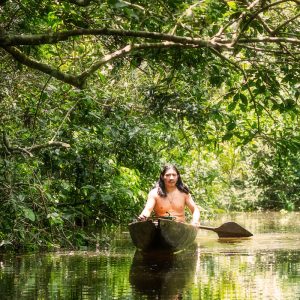